Q: Throughout his travels in Israel, the secular narrator of Monastery is challenged about his commitment to his Jewish heritage by a number of characters, including the casually devout Tamara, his ultra-orthodox brother-in-law-to-be, and a nationalistic cab driver. Why are their questions such a struggle for him?

A: I think only a Jew questions his sense of Jewishness. A Catholic doesn’t question why he’s a Catholic. A Muslim doesn’t question why he’s a Muslim. They either are or aren’t. But us Jews, inherently, neurotically, question our identity as Jews, we struggle to figure out what it means to be a Jew. I don’t know why exactly. As if, to exist, we need a struggle, any struggle, even one that is imaginary. It’s like the waiter in a deli who goes up to a table of old Jewish men finishing their meal, and asks, “Is anything alright?”

Q: At one point the narrator remembers a childhood prayer, spoken in Hebrew “that had no meaning beyond invoking the presence of my mother, who would come in to say good-night, to kiss us good-night.” Yet he’s also drawn to a prayer he finds at the Wailing Wall, and treats a yellow slip of paper from his grandfather as its own prayer, its own blessing. What are your own beliefs about prayer, and about the power of language?

A: I believe in the power of language, in the power of prayer, and at the same time in the impotence of both. I see all literature as small prayers. A story, or a poem, or a novel, is a form of prayer, or should be written and read as such. With reverence and respect and even awe while knowing full well that most prayers, in any language, in any form, remain unanswered.

Q: Lucille Clifton’s poem “won’t you celebrate with me” ends with the lines, “come celebrate / with me that everyday / something has tried to kill me / and has failed.” In Monastery, the narrator makes pilgrimages to—and tells stories about—places where people have struggled against the longest odds. Would you agree with Ms. Clifton that survival is worth celebrating?

A: I would agree more with her that every day is a struggle against destruction, against the silent withering away of our bodies and minds. I’m not sure, though, if this is cause for celebration. Perhaps it is. Perhaps all of us celebrate it in our way: some through prayer, others through song, others even through wine and love. Perhaps by celebrating it we somehow delay the inevitable, at least for another day.

Q: When the narrator visits the Wailing Wall, he’s unable to remember its biblical story, but he is able to recall an obscure song by The Cure about it. Jazz also features prominently in your work, and you’ve even deejayed an installment of NPR’s Alt.Latino. Does your love for music rival your love for literature?

A: They’re the same love. That is, I love them both, literature and music, for the same reason. Because I long to be moved. Because this world is not enough. Because some days it’s not easy to walk on water.

Q: From roast chicken with pineapple and herbs in Guatemala to crepes in a Polish milk bar, you describe some great meals. As a cook yourself—and someone who reminded at least one reader of Anthony Bourdain—can you share any recipes?

A: Sometimes I think eating well, picking up different recipes is the only reason I travel so much. I cook every afternoon, usually while I drink a glass of beer. I’ve cooked all my life. As a child, I used to go into the kitchen of my Egyptian grandmother and watch her cook all those fantastic Arab and Jewish dishes, full of magical spices, most of which I learned from her. One of those recipes—one of my favorites—is called mujaddara, which is a Lebanese rice and lentils dish. You first fry in olive oil some finely chopped onions, garlic, celery, red pepper. Add the lentils (preferably French green lentils) and some stock and let the lentils cook slowly until almost done. Some stock should remain. Pour in the same amount of rice (preferably arborio), and let it cook in the stock, until done. Let sit for at least an hour or a day. Serve with a sauce of yogurt, shaved cucumber, and chopped mint, and sprinkle everything over the top with carmelized, blackened onions. Ages beautifully—just refry in some olive oil, until golden.

Q: Meals aside, you don’t romanticize your narrator’s travels. From complaining about lost sleep and shoddy transportation, to stumbling away from dangerous situations and appeasing shady officials, he experiences it all. Is it important to understand him as not just our hero, but also a culpable witness?

A: The only thing that I look for in a hero, in any hero, is his humanity—his own culpability, and his own mediocrity, and especially his own self-doubt, as he stumbles and stutters his way through it all.

Q: At one point, the narrator remarks, “My eyes immediately searched for anything crossed out, anything forbidden, and I recalled the canvasses of Jean-Michel Basquiat, who wrote words on them and then crossed some out, so you’d see them more, he said.” Is your process as a writer similar in any way?

Q: As a fluent English speaker, you’ve described being involved with the translation process as akin to learning how the dance. Five translators were involved in bringing The Polish Boxer into English, and for Monastery, two of them—Daniel Hahn and Lisa Dillman—worked on the translation. Was the process any easier since the three of you already know the steps?

A: I think it was easier this time not because I knew the steps, but because I knew the translators. The more you work on a translation with someone, the more you know their rhythms and cadences and small obsessions—and the more they know yours. It’s like a marriage, I suppose, where slowly you learn to understand each other, to respect each other, and to love and uphold that child that you’re nurturing together.

A: I never know what I’ll write about next. I just start writing. I just sit down and see an image and try my best to give it to you, through words. If I could paint, I’d paint it for you. If I could sing, I’d sing it for you. But I can’t. I can only write that image, write from that image as a sort of starting point, and then just keep going forward. I sometimes feel that if I stop going forward, like a shark, I’ll die, or the image will die, or my words will die. Water needs to keep flowing through my gills. Images need to keep flowing onto my pages. And most of those images, most of my strongest impressions, yes, are from my travels. Perhaps that’s because I’ve never had a city of my own. I yearn for that, to someday have a city of my own, to settle down and write about somewhere warm and beautiful and poetic. But a Jew knows better. 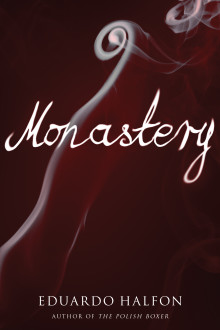