“Incurable is a word Charcot used: ‘The great asylum,’ he wrote, ‘as you are surely aware, contains a population of over 5,000 people, including a great number of incurables who are admitted for life. . . . In other words, we are in possession of a kind of living pathological museum, the resources of which are considerable.’ That word incurable has a flip side—as in, aren’t we all incurable when it comes to mortality? When it comes to desire? Here’s a playlist of music by women who are that flipside of incurable in their music, and often in their lives—brave, renegade, spilling over.”

Read more about and listen to Maud’s playlist for City of Incurable Women at Largehearted Boy—one of our favorite places on the Internet. It is, in the words of its curator David Gutowski, “a music blog featuring daily free and legal music downloads as well as news from the worlds of music, literature, and pop culture.” In the “Book Notes” series, authors create and discuss a music playlist that relates in some way to their recently published book. 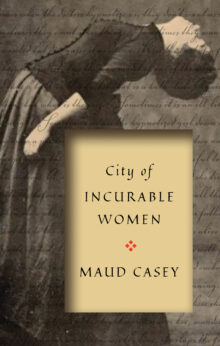