I Thought I Could Fly

Portraits of Anguish, Compulsion, and Despair 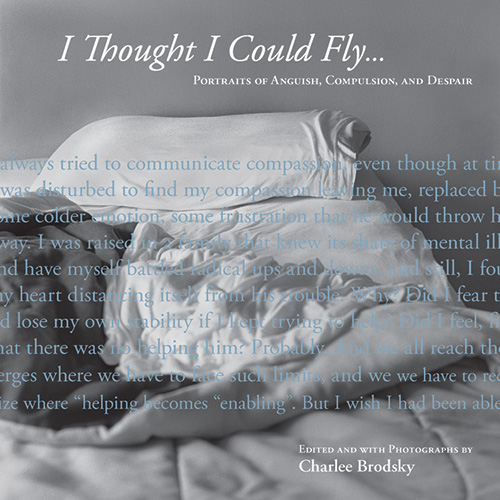 Peter D. Kramer, author of Freud: Inventor of the Modern Mind and Listening to Prozac

“A timely and engaging book that mixes both heartfelt journalism and emotionally engaging photography. I comment as [the second of three generations] with bipolar disorder and as a psychiatrist who specializes in the treatment of serious and persistent mood disorders.”

“With riveting images and moving words, this book provides a powerful and inspiring portrait of the far-reaching impact of mental illness in our lives today.”

Devra Lee Davis, National Book Award Finalist and author of The Secret History of the War on Cancer

A tree’s bare limbs against a grey sky, a young woman’s vintage slip, the view beneath a bridge’s span. Charlee Brodsky’s stark black-and-white photographs combine with a concise collection of moving personal narratives to form an eloquent ensemble of tragedy and hope in the struggle to cope with mental illness.

Excerpt from I Thought I Could Fly

I bought the slip at an outdoor vintage market on the eastern edge of the city. I liked it because it was pink and pretty and old. Someone’s old slip — it had mystery. It was the kind of lingerie that today’s lingerie tries to imitate.

For days I was writing, unable to sleep. I woke up in bed on a sunny afternoon, unsure of the day and when I had last eaten. I started packing all of my white and grey clothes and my favorite magazines and postcards. I would need these items for my trip. I was the chosen art historian for the trip into the atmosphere. There is a hole in my memory where time passed.

I remember twirling in front of my mirror, crying about something dark, and my mind repeating, “He’s a great man.”

My sister called and maybe I told her about my idea that Dad had invented the Internet, and that he was, in fact, God. I can’t remember. But she knew something was wrong because my Mom called next. Anxiously, I told her that I knew they were all sitting at Grandma’s house watching me — Dad, Mom, Christine, David, and everyone, using the hidden cameras. “I wish you would just tell me,” I said. “Put him on the phone, and tell him I want to go to the beach now,” I concluded. My mom told me to stay in my room, that she was sending Emilio, our family friend who lived north of Rome, to see me.

I took a bath in the blue bathroom that all the girls on my floor shared. The room was so lovely, all tile and utilitarian, but clean and the most rich Mediterranean blue.

The lady from downstairs knocked on the door and said “they” called, and were coming. She told me to stay in my room. I panicked, apparently forgetting who “they” were.

After quickly drying off, I put on my lovely pink slip over my favorite silver pants. I decided I would only take what was necessary. I grabbed my wine-colored hat with the thin black bow, my camera, and my long black coat. It was, after all, a cool December day.

In the hallway, I heard the single elevator rising to the fifth floor. I knew it was them. Like a fugitive, I ran down the stairs and bolted out of the front door when the lady at the desk turned her head. I ran down Via Panisperna, onto Milano, and up Nazionale towards the Opera. At that moment, I just knew that David was in Rome! I remembered (falsely) that we had made a plan to meet at the first hotel we stayed at when we visited Rome together a year before. I knew he was there waiting for me and wouldn’t be there much longer. If I were late, he would leave forever, and I would be turned into one of those statues in front of the tourist traps that stand very still for money. And I would be standing, frozen forever, the girl with the slip, wine- colored hat, and camera.

So I ran to meet David, the hardest I’ve ever run. But then I stopped, second- guessing myself, thinking that maybe that is just what they’d expect me to do. Instead, what I should do is just the opposite. Yes, they would never expect that I would stand still and wait for him to come. I stood still on the sidewalk, holding my Pentax K1000 with bare hands, my unbuttoned coat flapping in the wind. No, I thought, this can’t be right. He’ll leave without me! I should RUN to meet him. YES! Then I ran. NO! Stand still. NO. RUN! NO! YES! I had Mercury pulsing in my veins. So I gave my hat away. I just handed it to a woman, while she spoke rapid Italian that I couldn’t even hear. I pressed my hat with the petite bow to her, and I ran off, still, I think, trying to reach David.

Next, perhaps in an effort to run faster, I gave my camera away. The camera that my uncle had passed down to me, my only camera, my favorite camera. I handed it to someone and ran. In mid stride, I took off my coat to give to a woman. She shook her head speaking nonsense, and put it back on my bare shoulders. I was wearing just my pink slip, without a bra. Nothing. I ran faster than before, afraid I might be too late, to the metro station. No wallet, no money, I jumped the turnstile and ran. The security guard prevailed.

I was being dragged by two guards through the crowd of people waiting for the train. I heard my own screams echoing off of the walls, and I saw people staring at me the way people stare at a person who is screaming and kicking in a public place. But my head was buzzing with more and faster thoughts, so many that I’ll never remember, and I couldn’t stop myself.

“With riveting images and moving words, this book provides a powerful and inspiring portrait of the far-reaching impact of mental illness in our lives today.”

Devra Lee Davis, National Book Award Finalist and author of The Secret History of the War on Cancer

“A timely and engaging book that mixes both heartfelt journalism and emotionally engaging photography. I comment as [the second of three generations] with bipolar disorder and as a psychiatrist who specializes in the treatment of serious and persistent mood disorders.”

Peter D. Kramer, author of Freud: Inventor of the Modern Mind and Listening to Prozac 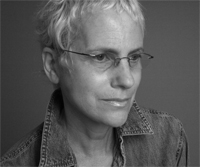 I Thought I Could Fly Book Trailer