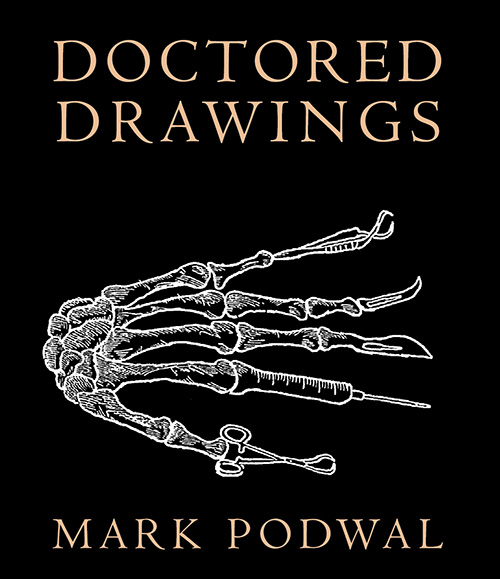 “Mark Podwal’s Doctored Drawings is plain brilliant! Podwal is like no one else that I know of, and his work will withstand the test of time.”

“Mark Podwal is in every sense an illuminator.”

Harold Bloom, author ofShakespeare: The Invention of the Human

“Mark Podwal is one of those startling souls — they are very few — who can imagine, through the power of a unifying eye, connections so new that they shake the brain into fresh juxtapositions of understanding.”

Cynthia Ozick, author of The Din in the Head

“Mark Podwal’s original drawings on current events in the fields of both politics and medicine reflect his great talent; endowed with insight and beauty they acquire the weight of personal commentary.”

“Because of a minor illness, perhaps just a bad cold, I missed the first few days of kindergarten. As a result, my name was not on the class roster. When my teacher read out the class list, as she did each morning, my name was never called. It was not until my teacher noticed a drawing of a train I had made that she asked, ‘Who are you?’ And so it seemed to me, at the age of five, that my existence depended on my drawing.” —Mark Podwal

Mark Podwal may be best known for his distinctive drawings on The New York Times OP-ED page, unforgettable witnesses to the momentous political events of the past thirty-five years. Doctored Drawings includes a selection of these alongside others in which he depicts the human body as a medical specimen and visually represents the essence of the most important public health issues of our time.

As the pen becomes the scalpel, comedy and tragedy converge and the personal, medical, and political play off each other with surprising results. These strangely beautiful, witty images reveal the hand of a master, for no artist is better equipped to capture this subject: Podwal is also a practicing physician.

It takes a doctor who’s partly somewhere else to be able to look at his own profession from the outside.

When I first met Mark Podwal, when we were in the same class at the New York University School of Medicine in the late 1960s, he was already partly somewhere else. Even as he studied medicine he was an artist. Even as he learned to treat patients he grew in his mastery of drawing and illustration. He had a great talent in the first field, and no less a talent in the second.
And, since then, he has lived in both worlds. He has continued to practice dermatology as well as develop his gifts as an artist. For three decades, readers of the New York Times and other publications, as well as those who have seen his art in numerous books and exhibitions, have been illuminated by his interpretation of messages—political, historical, mythical, religious.

Of the many realms he has touched with his artistic work, two stand out as drawing him back to them time and again.

One is the realm of Jewish tradition, which infused him with its images and which he has infused in turn with his. The other is the realm of medicine, which also infused him with its images, and which has also been infused with his. By chance, Podwal’s work in art, and mine in writing, intersected twice in the New York Times. In 1994 I discovered that an essay of mine on the dangers of physician-assisted suicide, titled “First Do No Harm,” was illustrated by a stark drawing of a skeletal hand whose fingers had been transformed into surgical instruments: the hand that could heal but also harm. It conveyed my argument better than my words did. And in 2002 an essay of mine in the Times, titled “Appropriating the Holocaust,” was illustrated by a striking Podwal image of multiple train tracks, in the shape of a swastika, leading to the anus mundi that was Auschwitz.

But most of Podwal’s work hasn’t focused on death and destruction. In the realm of medical themes, in fact, it has been, in the main, very different—imaginative, clarifying, iconoclastic, incisive, whimsical, absurd, funny. It took a doctor to be able to turn doctors, including himself, into caricatured specialists, each identified by an instrument— surgical, say, or dermatological, or gynecological—typically used by that specialty. It took a doctor to be able to summarize cancer as a cell that had turned into a crab— the astrological cancer. It took a doctor to be able to understand the complexity of an intensive care unit, but also to understand its inescapably embedded costs.
For Podwal, growths, with which he deals every day as a physician, could also be seen as blooming flowers. For him, the idea of radical surgery could be, whimsically, applied to hair transplants, which are, in the version radicalized by his imagination, inserted not into the scalp but into the brain below. A second opinion in the age of rationed care is not a second stethoscope listening to the patient but a second stethoscope listening to the first. The complexity and specificity of medical treatments are captured in a drawing purporting to teach which pills or injections treat which ills at which site in the body. The consequences of war are evoked by a bone dangling from a military ribbon. The projection of government, through Medicare, into the lives of all Americans is shown by a Capitol dome sprouting tentacles that hold medical instruments. Medical conditions, seen under a microscope, reify their metaphorical medical names: ichthyosis (fish skin), drawn at high power resolution, reveals—little fish! And dermatophytosis (a fungal infection), as seen through

Podwal’s microscope, reveals—what else?—mushrooms. Only a doctor—and a dermatologist at that—would have the authority needed to achieve such concretized whimsy.

Only a doctor, moreover, living in the age of managed care, which in some ways has ensnared not only patients but also physicians, could have the insight, provoked by bureaucratically-induced pain, to draw an image of a “provider”—as insurance companies and Medicare have come to call doctors—as a voodoo doll: white-coated, impaled by syringes, in managed-care agony. In fact, the idea of managed care as a medical process that doesn’t work—because it maims the doctor, the patient or medical care itself—is evoked more than once, as in the drawing of a Rube Goldberg-like medical system that managed care has managed to bury in the morass of its own complexity.

Mark Podwal has a lot to say about medicine. And he says it with authority, sincerity, gravity and humor—and from the outside no less than from the inside.

“Mark Podwal’s original drawings on current events in the fields of both politics and medicine reflect his great talent; endowed with insight and beauty they acquire the weight of personal commentary.”

“Mark Podwal is one of those startling souls — they are very few — who can imagine, through the power of a unifying eye, connections so new that they shake the brain into fresh juxtapositions of understanding.”

Cynthia Ozick, author of The Din in the Head

“Mark Podwal is in every sense an illuminator.”

Harold Bloom, author ofShakespeare: The Invention of the Human

“Mark Podwal’s Doctored Drawings is plain brilliant! Podwal is like no one else that I know of, and his work will withstand the test of time.” 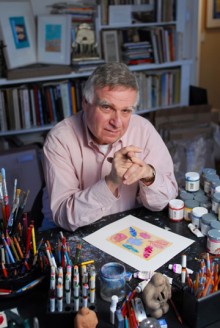