Jerome Charyn talks to the Literary Hub about the books that inspired his new novel Cesare and with Stay Thirsty Magazine about the way history shapes all his work.

We at Bellevue Literary Press mourn the passing of Meredith Tax, our beloved friend and author of A Road Unforeseen: Women Fight the Islamic State. Her commitment throughout her life to women’s rights, most recently with her work with Kurdish women, was central to her writing, and her political engagement was propelled by unflagging belief and infused with joy. She was an ongoing source of inspiration to us and many others.

I was quite intimidated by Gerry Weissmann, who was three years ahead of me when I became a resident on the New York University Medical Service in 1970. That feeling persisted, so it was with some trepidation, in 1992, that I asked him to suggest a publisher for a book I had just written (my first). The title was to be A User-Friendly Field Guide to the Subject of Acid-Base Disorders through the Magic of Ion Transport. While I held my breath, Gerry said, “Needs a better title . . . Acid and Basics,” and without missing a beat, he recommended an editor, who then bought my book to be published by Oxford University Press.

That was the beginning of a relationship that included, most importantly, his recommendation that I seek the help of Erika Goldman in finding a publisher for a novel based on the life of Lawrence J. Henderson. That meeting with Erika ultimately led to the creation of Bellevue Literary Press.

He was generous with his praise, when he felt it was warranted, and very supportive of my work. Just two weeks before he died, I consulted him for a reference to a quote by Lewis Thomas. He replied within an hour with both the answer and a Weissmannian quip.

His intelligence and wit will not be matched.

IN MEMORIAM: It is with great sadness that we mark the passing of Gerald Weissmann (August 7, 1930 – July 10, 2019), four of whose remarkable essay collections we had the honor of publishing: The Fevers of Reason, Epigenetics in the Age of Twitter, Mortal and Immortal DNA, and Galileo’s Gout. His extraordinary erudition and keen wit graced everything he wrote. His dedication to engaging “the two cultures” of the arts and the sciences in fruitful, even revelatory, dialogue epitomized our mission and served as a constant source of inspiration.

Blurring the line between fact and fiction, Eduardo Halfon shares family photographs and an annotated excerpt from Mourning in “A Yom Kippur Scene (With Footnotes)” on the Jewish Book Council’s “ProsenPeople” blog.

Tune into a terrific conversation between debut novelist Diane DeSanders, author of Hap and Hazard and the End of the World, and Bellevue Literary Press publisher Erika Goldman in the General Society of Mechanics & Tradesmen’s Labor, Literature and Landmark lecture series.

Congratulations to Jerome Charyn, whose A Loaded Gun: Emily Dickinson for the 21st Century has been named to the Phi Beta Kappa Christian Gauss Award Short List and the PEN/ Jacqueline Bograd Weld Award for Biography Longlist, and is a Firecracker Award Finalist. 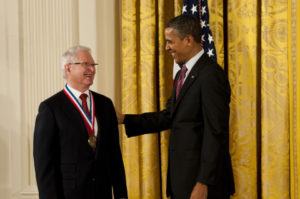 Congratulations to Bellevue Literary Press board member Jan Vilcek, who has been named a fellow of the National Academy of Inventors, which honors leaders in academic invention whose discoveries have made a significant impact on quality of life. Dr. Vilcek is also the recipient of the National Medal of Technology and Innovation.

Ploughshares shines their “Indie Spotlight” on Bellevue Literary Press, while Publisher and Editorial Director Erika Goldman joins the 1888 Center’s The How The Why podcast to discuss BLP’s unique mission.

Tune in to the Late Night Conversation podcast to hear our publisher Erika Goldman discuss being a part of the NYU School of Medicine and the nexus of art and science.

Passion. Vision. Courage. Chance. BLP Publisher Erika Goldman and Akashic Books Managing Editor Johanna Ingalls discuss independent publishing and the unmistakable joy readers bring to all our endeavors: “When you put something out there that you’re passionate about and other people respond . . . there’s nothing like it.”

“It’s clearer than ever that our future as a nation depends on keeping th[e] spirit of curiosity and innovation alive in our time. These honorees are at the forefront of that mission.”

President Barack Obama honored Jan Vilcek, MD, PhD with a prestigious National Medal of Technology and Innovation during a White House awards ceremony on February 1. This year eleven individuals received this medal, the highest honor bestowed by the United States government upon scientists, engineers, and inventors. We are deeply grateful to Dr. Vilcek for his service on our board—and for the contributions he has made to the arts and science communities throughout his extraordinary career.

Bellevue Literary Press is a finalist for AWP’s Small Press Publisher Award—an annual prize for nonprofit publishers that honors the “publication of consistently excellent work.” Winners will be announced this March at the AWP Annual Conference & Bookfair in Boston.

Publisher Erika Goldman talks to City Lights Booksellers & Publishers about what’s exciting her at “this moment in publishing.” Find more insight from fellow independent publishers, including Akashic Books and Feminist Press, in this terrific interview series.

The National Endowment for the Arts has announced their 2013 Art Works grants and we’re very proud to be among the literature recipients. Our $10,000 grant will be used to help readers discover and engage with our books through a variety of creative digital initiatives.

Thanks to the dedicated staff at Sonnet Media, we now have a place to share all the stories behind the books we publish. Over the coming months, we’ll be adding Q&As with our authors, excerpts from their books, reading group guides, videos, and more. We are also excited to unveil our new logo, which impressed author Jonathan D. Moreno as being an accurate reflection of our belief that literature is indeed life’s laboratory. We hope you’ll visit us often to enjoy our latest concoctions.

While we’re thrilled to have found a new home online, it may be many weeks before we can return to our office in Bellevue Hospital Center. In the New England Journal of Medicine, our board member Eric Manheimer offers a personal reflection on Hurricane Sandy, aptly quoting Theodore Rothke in his epigraph: “In a dark time, the eye begins to see.”

Also in the New England Journal of Medicine, Danielle Ofri, our board member and the editor of The Best of the Bellevue Literary Review, recounts the extraordinary efforts of New York University Medical Center staff in the wake of the hurricane and beautifully evokes the reason we are so proud to be a part of the NYUMC community:

“Bellevue’s enormity is more than its imposing physical presence, more than its legacy as the oldest public hospital in the country, more than its outsized reputation in popular culture. Its grandeur resides in its status as a living, breathing medical organism. It possesses a gritty industriousness and a cacophonous vitality. The ferocious loyalty it has engendered for the past 276 years is apparent in its staff as well as its patients. Many of us have spent our entire working lives at Bellevue and couldn’t imagine being anywhere else.”

We can’t wait to get back.

UPDATE: We are thrilled to announce, that as of March 29, 2013, we have returned to our offices in Bellevue Hospital.